Yin Yang At The PGA 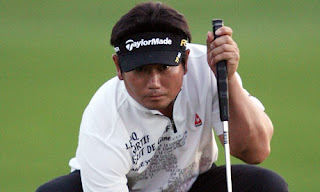 This afternoon at Hazeltine National Golf Club in Chaska, Minnesota, South Korean Y.E. Yang literally came out of nowhere to win the 91st PGA Championship by three strokes. That makes two Majors in a row where an underdog has shocked the world to contend for one of golf’s biggest tournaments. But unlike Tom Watson at the British Open, today, the bark of the underdog was so loud, it drowned out the roar of a Tiger.

Going into Thursday, the odds on Y.E. Yang winning the PGA Championship were 250 to 1. Odds on Tiger Woods? 5/4. Going into Sunday, the odds could have been a billion to 1, because prior to today, when Tiger took a 54-hole lead into Sunday he was an unprecedented 14 for 14. In his last 30+ tournaments since returning from knee surgery, he’s won half the tournaments he’s played. The guy is automatic.

Today’s final round at the PGA was a formality. There was no way Yang could hang with Tiger. Paddy Harrington is the 10th ranked player in the world. Last week he hung with Tiger, shot for shot, for 15 holes at the Bridgestone, but on 16 he threw down a triple bogey and it was over. Today was no different. Yang played steadily all day, but you knew the meltdown would come. Even when Tiger struggled early, everyone knew he’d pull it out. Shoot, going to 18 down a stroke, you almost expected him to knock in an Eagle from the fairway because that’s what Tiger does. But not today. Instead, it was Yang who knocked a 3-iron stiff from 203 yards to set up a birdie on 18 for a three-stroke win.

It’s not just that this wasn’t Tiger’s day. Tiger didn’t lose. He got beat. And that is why golf tournaments and national elections and new business pitches aren’t decided on paper. They are decided where the underdog has a chance to perform and show that on any given day, the most expected thing in the world, can be the unexpected.

Y.E. Yang is the first Asian player to ever win one of golf’s major championships. That’s 416 majors over 149 years without an Asian champion. Not Jumbo Ozaki. Not Isao Aoki. Not K.J. Choi, T.C. Chen, Liang-Huan Lu, or Shingo Katayama. It was Y.E. Yang – a golfer who nine months ago was at PGA Q-school trying to get his card. A golfer ranked 110th in the world. A golfer who this morning, with every odd against him, said today, I can beat the best in the world. And then did.

We challenge underdog brands to think differently. We help them find their voice, and urge them to blaze new trails to make sure they stand out from the pack. Whether you need an agency of record or support on a project, we are here to help you win.

The Voice of the Underdog®